Attempts to close the gap between technology and nature has led to the creation of a range of innovative ideas. Bio-mimicry is an approach where nature’s principles provide inspiration to create things in a similar way that nature has spent years and years perfecting.

Glowstone is a mixture of synthetic aggregate, inspired by bioluminescence. When the pebbles are exposed to light sources, the photoluminescent pigment becomes chemically excited and will afterglow.  This product enhances safety in ares were there is little light and the effects is most pronounced in dark areas.

Innovation relies on creating new links and linking a fruit to electricity may seem strange. Yet pomegranates have inspired researchers at Stanford University  to design a supercharged anode battery. The design of this battery is still undergoing changes so you cannot purchase it yet but it is an exciting step towards new battery design thinking. 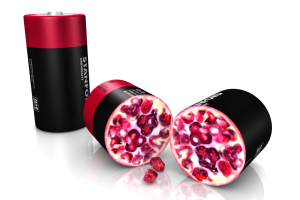 The  unique seed design of the pomegranate was used to create to a battery that can store 10 times more charge than a standard rechargeable lithium-ion battery. The silicon anodes (a battery’s negative electrodes) are clustered like pomegranate seeds, and the anodes are encased in carbon shells that conduct electricity. Graphite anodes are also grouped in clusters but they form gunk during the cycling process. This deteriorates the life of the battery, while the silicon anodes arranged like a pomegranate seeds, are smaller than the  carbon outer casing. This design means more leeway when cycling and this battery lasts longer – the silicone seeds can swell which reduces the interaction between silicon and the other battery chemicals.

Traditionally, it has been difficult to use silicon in batteries since it gets brittle and  reacts with other chemicals in batteries, which eventually kills the whole system.

Biomimicry innovations are based upon principles that nature has developed throughout history.  Nature and technology has often been seen as polar opposites, yet scientific knowledge particularly in biology can results in the development of exciting new designs and products.

2 Replies to “Innovations Inspired by Nature”