Some time ago Robert Sheldrake  suggested ten dogmas of modern science. In a TEDx presentation he argued that science,  by using a rigorous method, has become a belief system that has become the default in the scientific community and this system is based on reductionism and  mechanical philosophy. This idea caused an uproar in the scientific community and – ironically – also the watchers of the YouTube channel “Ideas Worth Spreading”.

As followers of Thinkibility already know, the more controversal a topic is, the more interesting. Sheldrake had apparently broken a pattern of thinking or challenged a common pattern and this was followed, as it always does,  by anger and attack. Below are the ten assumptions Sheldrake suggested in his talk.

You may or may not agree these assumptions, but that is not the point to be taken here, in our point of view. We belief that putting these assumption in a True either/or Untrue box is a  premature approach. Of course, we could use these assumptions as preliminary hypotheses to work with, yet it is wise to acknowledge your assumptions and not regarding them as dogmas. Instead of that we could better, or even must, regard them as possibilities and triggers to question: “What if?”.

Also, as Kant argued, it is not sufficient that hypothesis are positive confirmed by experiments. Kant recommended that we should  indicate under which conditions a hypothesis would be wrong. A hypothesis is called falsifiable if it is possible to conceive an observation or an argument which proves the statement in question to be false. Could we?

Challenging the dominant thinking patterns in science could led to a paradigm shift as Thomas Kuhn described in his book The Structure of Scientific Revolutions. A paradigm shift is a change in the basic assumptions, or paradigms, within the ruling theory of science. It is in contrast to the idea of normal or generally accepted science.

Beside our considerations above, it would be an excellent exercise in Thinkibility to think up a compelling science fiction story by challenging the standard beliefs of science. 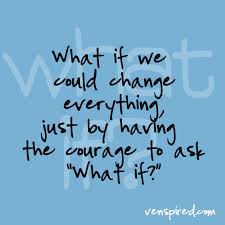 We have written about standard patterns and possible escapes from them in the following blogposts:

4 Replies to “Thinking Patterns in Science”