The introduction of computers and the Internet combined with an explosion in information have led to an overabundance and in many cases confusion. Determining what is facts, false information, opinions are becoming increasingly more difficult.

Finding ways to use thinking to overcome problems with abundance and faulty information is vital. So is inventing tools to make sense of data.

Designing a system that makes sense of data in a way that is novel and specific enough so that insights can be gained without human involvement has proved to be a difficult task. The last decades has seen major breakthroughs in the collection and storage of data but few advances has been made in sensemaking systems.

Jeff Jones suggests that it is fundamental that the system recognises when multiple references to the same item are being made. The data may come from different sources and it is crucial to distinguish between one person making one bank transaction an two people doing one transaction. But is it not enough to count things, actions and people, sensemaking systems must also make statements and use these to determine what or whom to notify is the new evidence is important.

Imagine that you cannot use your eyes to catch a Frisbee. What would you use instead?

The flight of the disc is predicted when someone throws a Frisbee and we use our previous experiences mixed with the velocity and the direction to predict where the Frisbee will end up. Usually your eyes and brain collects and make sense of these observations. But imagine that a slow motion Frisbee is thrown towards you and friends using Twitter, photos , stories, heat maps to tell you where it takes place,  the velocity and direction of the Frisbee.

Would you catch it?

We try to make sense of even more complex situations than the motion of a Frisbee. For example, emergency service may receive five calls from people reporting that a child is being abused. There could be one child that they could hear screaming or it could be five different children being abused.

Below is an example of using numbers to make sense of complex movements. maybe this will inspire some great thoughts about other ways of making sense of information, data or the world in general. 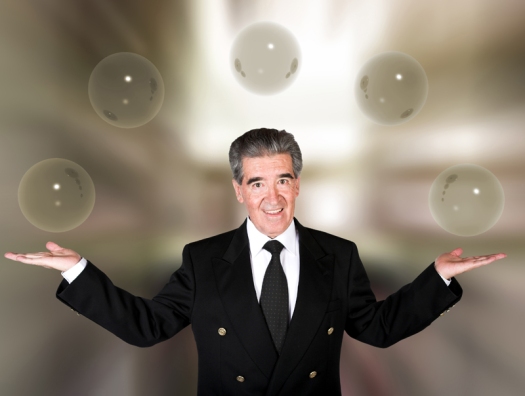 The world of numbers is often described as serious and linking it to brightly coloured balls and a person clowning around may sound strange. Yet juggling and numbers have more in common than the first impression may suggest.

Colin Wright is a mathematician who was frustrated that there was no way to write down juggling moves so he helped develop a notation system for juggling.

A juggling move called Mills Mess required two and a half sides of A4 to write down and Colin thought that there must be a simpler way of writing down the juggling moves. The system devise that was developed is called Siteswap.

The system encodes the number of beats of each throw, which is related to their height and the hand to which the throw is made. Throwing a three means the ball spends two beats in the air and one beat in the hand before it is thrown again, while a four means the ball spends three beats in the air then one beat in the hand before it gets thrown again. The height of the throw is taken into account and the bigger the number the higher the throw. Even numbers are used to represent balls being thrown straight up and caught with the same hand, while odd numbers represent balls being caught with the opposite hand.

The sequence 333 means that the three 3 ball are used – each ball is caught with the opposite hand and there are three beats between the throws. The Siteswap system means that jugglers can share tricks without having to meet in person or filming themselves. Sharing tricks involving five balls or different height is rather tricky and saying the numbers 51515252 52 52 is easier to understand. The coding system has also lead to development of new exciting tricks – the notation means that pattern emerges and this can be broken.

2 Replies to “Making Sense of Data”