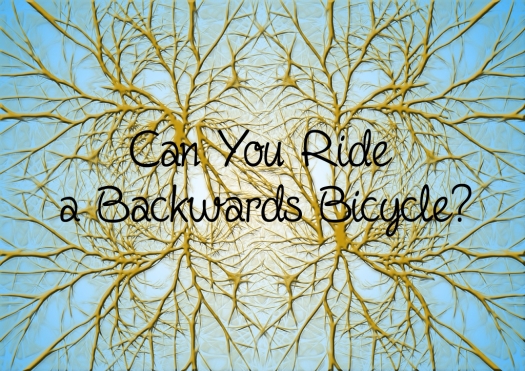 Make a simple change to an ordinary bicycle and you might have to spent eery day for 8 months to learn to ride it. The fascinating thing is that child could probably learn it in a couple of days.

A fascinating practical example of neuroplasticity is provided in the video below from Destin’s Youtube channel called SmarterEveryDay.

Welders at Destin’s workplace modified a bike. A simple reversing of how the handlebars operate.

So if it took Destin eight months to learn the bicycle, how quickly do you think it could learn to ride a normal one again?

The term neuroplasticity refers to that our brain is not fixed and wired rather it has a lifelong ability to reorganise neural pathways. New experiences mean that the brain is constantly changing with learning. Our brain is plastic and different types of plasticity dominate during certain periods of our life. A child’s brain is more plastic that an adults’ but we can make new connections and learn new skill throughout our lives.

Go here to read more about plasticity. And yes, brain plasticity was one idea that it was suggested is blocking progress “This Idea must Die“, edited by john Brockman.