There are several ways to design a new concept deliberately. But what is a new concept? Not many people have a quick answer to this question, other than “differently than expected”, “something else as normal”, “not seen before” or just “interesting”.

One of the easiest ways to design a new concept is to escape from an existing concept. For that, we need a concise description of the existing concept, otherwise we will be lost in all the details containing in the concept.

In an earlier blog post we gave some handles to describe a concept:

Escape for instance the mechanism: instead of two there are three teams and three goals. 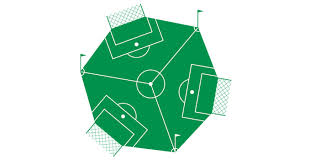 You can imagine that three-sided football will be a real game-changer, literally. As the BBC mentioned: a game of alliance and betrayal. The whole dynamic of the game is dramatically changed.

Once a new concept has”opened up” in your mind, we might “see” the world in a disruptive way, through the new concept and take analogies from it.

For instance: the conflict in Syria is basically a three-side game. That might open up new strategies and policies for military planning and diplomacy. Or prevent from blundering into military and diplomatic disasters by interpreting wrongly a three actors situation as a classical two actors cold war situation.

Or we can apply the same concept escape to another two-sided  game, f.i. three player chess

We could also escape from the aspect of values, by excluding, adding, or changing values.

Escape from values: add spectacle to the game.

Ideas:  change the game from 2D into 3D, using acrobats.

Actually, the concept change is from 2 D to 3D. This new concept can then be applied to other 2D games and opens new possibilities, like 3D chess

The same we could apply to escaping from function (goal, aim or objective of the concept). F.i. the function of a pension is that people who can’t work any longer are provided with a minimum of money to survive.

We could change the function: let’s suppose that the aim of “pension” is to keep the retiree as long as healthy. Now we can come up with mechanism that could realise this new function. For instance that the retiree does not receive a fix amount of money per year during the rest of his life time, but a linear increasing one. This would stimulate the retiree to stay active during the first years of his pension, by doing some paid work  during some hours in the week.

Many new business models are the result of changing one or more aspects of the concept description. See for example  how these fast-growing, innovative companies are redefining money lending, e-commerce, and more,