A new adage is blowing around in the world of innovation. According to Wikipedia, The term “big data” often refers simply to the use of predictive analytics, user behavior analytics, or certain other advanced data analytics methods that extract value from data, and seldom to a particular size of data set. Analysis of data sets can find new correlations to “spot business trends, prevent diseases, combat crime and so on”.
It is reminiscent of an early US Navy doctrine, as a codification of beliefs or a body of teachings or instructions, taught principles or positions, as the essence of teachings in a given branch of knowledge or belief system. As such, it is a thinking pattern, in which is stated that “information superiority permits the conduct of operations without effective opposition”.

However, in an electronic war game back in 2002 one aircraft carrier, ten cruisers and five out of six amphibious ships were sent to the bottom of the Persian Gulf in the span of just one hour, resulting in the virtual death of over 20.000 US service personnel.

It was the result of an asymmetric strategy by the opponent forces.

Red, commanded by retired Marine Corps Lieutenant General Paul K. Van Riper, adopted an asymmetric strategy, in particular, using old methods to evade Blue’s sophisticated electronic surveillance network. Van Riper used motorcycle messengers to transmit orders to front-line troops and World-War-II-style light signals to launch airplanes without radio communications.
Red received an ultimatum from Blue, essentially a surrender document, demanding a response within 24 hours. Thus warned of Blue’s approach, Red used a fleet of small boats to determine the position of Blue’s fleet by the second day of the exercise. In a preemptive strike, Red launched a massive salvo of cruise missiles that overwhelmed the Blue forces’ electronic sensors and destroyed sixteen warships (Wikipedia)It is the same kind of bold thinking we noticed in our blog Thinking outside the SeaMap:  “doing different things” or “escaping the temptation to do more-of-the-same but only better”. 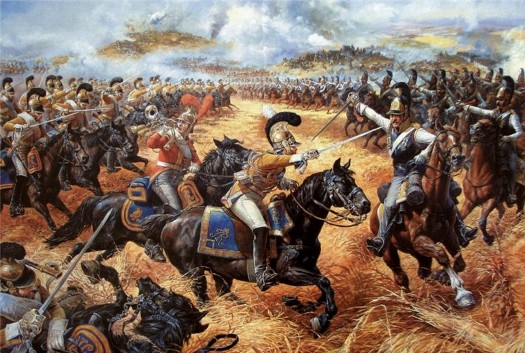 Military strategists distinguish between symmetric and asymmetric warfare. Symmetric warfare is characterized by standing armies that follows more or less the same tactics and organized in the same way. Their standard mode of operation can be traced back to Napoleonic Warfare.

Asymmetric competitor strategies could be an effective approach in business. Basically, it is not playing the game similar to the other companies, that is selling and marketing the same products as competitors but cheaper and better. It is about disruptive innovation, changing the rules in the market, by delivering a complete different product than you competitor does. It is all about gaining competitive advantage by creating an unique niche in the market. Playing another race at a different circuit.

There is much more to say about the embarrassing destruction of the mighty US Navy, as the over reliance on technological superiority and information dominance. It’s all about big organizations and the neglect of intuition about the intentions and capabilities of the competitor.

There is much more to say about the embarrassing destruction of the mighty US Navy, as the over reliance on technological superiority and information dominance. Also, the neglect of intuition about the intentions and capabilities of the enemy.

Disclaimer: Now you have heard  about the advantage of disruptive innovation or step-out innovation and decide that your organization should do “some of that.” But most organizations are designed to do something else very well. Namely, what they are already doing. You may have a brilliant vision, you may have identified the next great idea, but organizational routines, standard Key Performance Indicators and existing organizational structures will prevent proper execution: The company will will continue to do what they are already doing succesfully: ” a tiny bit better and a tiny bit cheaper?” See “Why Big Companies Can’t Innovate” by Maxell Wessel.

One Reply to “What Big Data, what information dominance?”