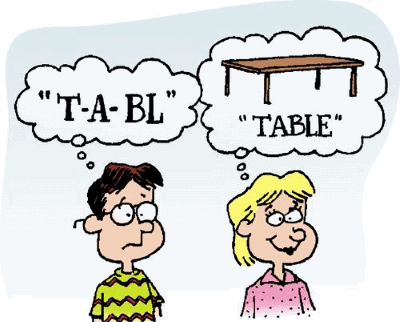 Most people think in words. When asked to imagine a traffic accident they come up with not very detailed descriptions, in comparison with people who are thinking in pictures. It became even worse if the words are becoming more and more abstract. Words as society, market, law, inflation etc. stay for them just words; they are unable to convert the words into images. Picture thinkers don’t have to translate, they think in pictures.

As school systems are mainly auditory-sequential oriented, it is not surprising that mainly visual-spatial thinkers will have problems at school. Usually, they encounter learning difficulties. But not only at school. Most picture thinkers don’t fit well in traditional companies and institutions. They do things in other ways than expected or “normal”, due to “weaknesses” in thinking.

Picture thinkers are also called right-brainers, as some popularisations oversimplify the science about lateralization, by presenting the functional differences between hemispheres as being more absolute than is actually the case.

We have also committed to this theoretical sloppiness with left/right brain generalisations, although, a handy mini theory to generate creative ideas as we have demonstrated in Blocking the Left Brain Functions.

As we wrote in left brain/right brain thinking, the debate regarding about what goes on in our left and right brain hemispheres seems like a never-ending story. You will find support for the idea that creative people use the right hemisphere while people who are good at organising things are using their left hemisphere. But we can also find support for the idea that creative and non-creative thinking are not two different things but are more reinforcing each other.

The idea that the brain has different specialised functions that can be used to improve memory, learning and thinking are also the part of the foundation behind mind mapping.

A Whole New Mind: Why Right-brainers Will Rule the Future, a book by Daniel H. Pink, posits that the future of global business belongs to the right-brainers. He outlines six essential senses:

Daniel Pink is one of an increasing number of writers on the importance of the Conceptual Economy, as a follow-up of the Information and Knowledge Age. Conceptual economy is a term describing the contribution of creativity, innovation, and design skills to economic competitiveness, especially in the global context. Other contributors to our understanding of the conceptual economy include Tom Friedman’s The World is Flat, Tom Kelley’s The Art of Innovation and The Ten Faces of Innovation, explaining the role of assets such as empathy, storytelling, individual experiences and stimulating work environments in fostering creative ideas.

The discussion about the necessity to escape from dominant linear-sequential thinking was earlier argued by Howard Gardner. He developed The Theory of Multiple Intelligences in his 1983 book Frames of Mind:

In one of our next blog posts, we will give hints and tricks together with some useful resources to become “picture smart”. An essential skill to use mind mapping to the fullest of its advantages.

2 Replies to “Thinking in Images”