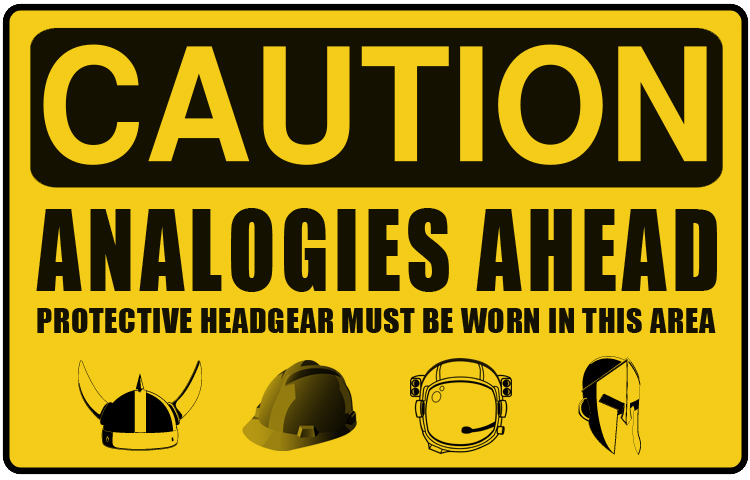 Many teachers in analytical/critical thinking and writing clearly forbid students the use of analogies, because, in one sense, all analogies are faulty. However, as George Lakoff,  known for his thesis that the lives of individuals are significantly influenced by the central metaphors they use to explain complex phenomena, convincingly argues  that all our thinking is metaphorical.

“That’s as useful as rearranging deck chairs on the Titanic. It looks like you’re doing something helpful but really it will make no difference in the end”

“Heart failure from fast atrial fibrillation is like  an over-revved engine.  helps patients with a mechanical background to understand what has gone wrong, as do many other mechanical analogies involving pumps, valves, and pipework of various sort

“She didn’t insist too much on what she was telling us, and it became clear she was in a position similar to that of a veteran Soviet bureaucrat who must work on two levels at once: reality and official ideology”

“Key Concepts are as optical filters define. They define what we see and what is left out. “

“Every American war since 1975–Grenada, El Salvador, Nicaragua, Panama, Bosnia, Kosovo, Kuwait, Afghanistan—tends toward comparison with Vietnam, as a cautionary reminder about the arrogance of power

Instead of prohibiting, a more constructive approach would be to apply the strengths and avoid the weaknesses of thinking in analogies.

A productive way to assess analogies that are presented to you is to Recognize, Analyse and Compare the used metaphor against the present situation

Recognize:  To know who someone is or what something is, because you have seen, heard, experienced, or learned about them in the past

Analyse: Break an issue into its constituent parts. Look in-depth at each part using supporting arguments and evidence for and against as well as how these interrelate to one another.

Compare: Identify the similarities and differences between two or more phenomena. Say if any of the shared similarities or differences are more important than others. ‘Compare’ and ‘contrast’ will often feature together in an question.

What proves an used analogy as weak or strong evidence?

In what regards are the two things being compared similar?

And it what regards are they different?

Why are the differences and similarities relevant?

In what regard relate the differences and similarities to the underlying principle illustrated by the analogy?

Could there alternative metaphors constructed?

Generate your own analogies

A productive way to generate your own analogies is, according to Asking the Right Questions  (M. Neil Browne and‎ Stuart M. Keeley): 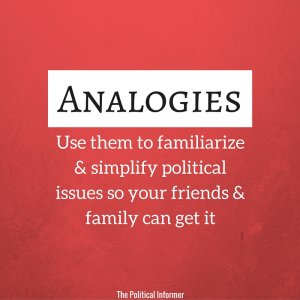 Identify some important features of what your are studying.

Try to identify other situations with with you are familiar that have some similar features.

Give free rein to your imagination. Think creatively. Try to imagine diverse situations.

6 Replies to “Thinking in Analogies”