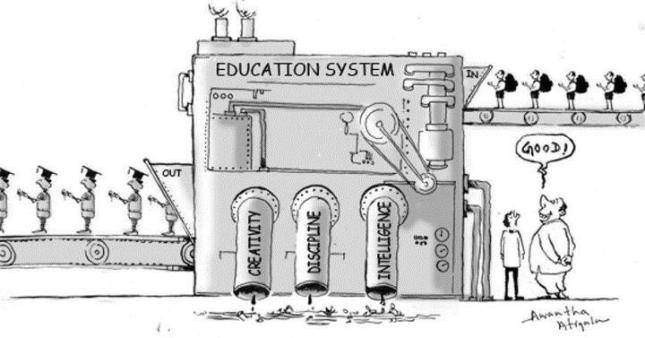 “We are born creative geniuses and the ‘education’ system dumbs us down, according to NASA scientists” headlined a post about a NASA test for creativity for spotting creative geniuses was applied to young children. Children between 4 and 5 scored a full 98%. When the children 5 years later were tested again, only 30% of the children now fell in the genius category of imagination. At the age of 15 it declined to 12 percent. Over 300, 000 adults completed the test, average age 31, and only two percent of them scored in the genius-level for creative thinking.

It is a rather popular topic, witnessed by Ken Robinson’s Ted-talk “Do Schools Kill Creativity?” the most popular talk that  TED fans just can’t stop sharing.

Now is the problem with this talk and lots of articles about creativity,  that the author omits what he means by creativity. But in 9 out of 10 contributions it concerns artistic creativity, or worse, of the kind how many applications of a paperclip someone can think of.

Another problem is the obvious and the far too easy assumption that it is the school system that kills creativity. Why should that be so,  as even some  for years highly educated rocket scientists in NASA apparently still are creative geniuses, despite their thorough scientific methods? And what is it exactly, that kills creativity in schools?

Here is a need for alternative explanations.

Can you come up with some?