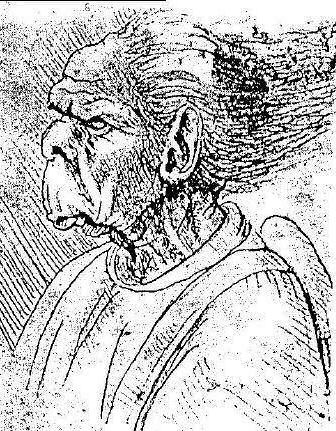 Leonardo DaVinci’s grotesque heads and famous caricatures are an example of the random variations of the human face made up of different combinations of a set number of features.  He would first list facial characteristics (heads, eyes, nose, etc.) and then beneath each list variations. Next he would mix and match the different variations to create original and grotesque caricatures.  Below is a hypothetical example of a box similar to one that DaVinci might have constructed:

While the number of items in each category is relatively small, there are literally thousands of possible combinations of the listed features. The circled features indicate only one out of thousands of different grouping of features that could be used for an original grotesque head.

From his notebooks, it is clear that DaVinci used this strategy in his production of art and invention.  He advised being on the watch to take the best parts of many beautiful faces rather than create what you consider to be a beautiful face.  It is intriguing to speculate that the Mona Lisa, probably the most admired portrait in the world, is a result of DaVinci combining the best parts of the most beautiful faces that he observed and systemized.  Perhaps this is why admirers find so many different expressions in the mix of features on the face of the woman in the painting.  It is especially interesting to consider this possibility in the light of the fact that there is so little agreement about the actual identity of the subject.

One can almost see Leonardo composing a matrix of elements (Apostles, types of reactions, conditions, facial expressions, types of situations) and experimenting with their variations and combinations until he found the right configuration to create that once in a lifetime masterpiece — the “Last Supper.”  Many other artists before him had 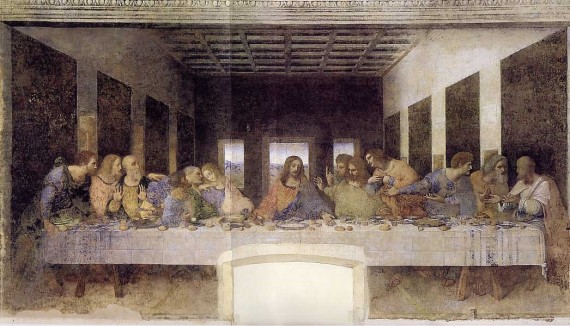 made their own versions of Jesus Christ having his last meal with the twelve apostles, but when Leonardo painted the picture, the scene came alive with new meaning that no one else was able to give, or has been able to give since.

DaVinci would analyze the structure of a subject and then separate the major parameters (parameter means characteristic, factor, variable, or aspect).  He would then list variations for each parameter and combine them.  By coming up with different combinations of the variations of the parameters, he created new ideas.

The procedures for using DaVinci’s technique are:

4.     When you are finished listing variations, make random runs through the parameters and the variations for the parameters, selecting one or more from each column and assemble the combinations into entirely new forms.  During this step, all of the combinations can be examined with respect to the challenge to be solved.  If you are working with ten or more parameters, you may find it helpful to randomly examine the entire group, and then gradually restrict yourself to portions that appear to be particularly fruitful.

5.  Let’s look at an example.  A car-wash owner wanted to find an idea for a new market or new market extension.  He analyzed the activity of “product washing” and decided to work with four parameters: Method of washing, products washed, equipment used, and other products sold.

NEW BUSINESS: The random combination of (Self + Dogs + Brushes + Dryers + Stalls + Sprayers + Related Products) inspired an idea for a new business.  The new business he created was a self-service dog wash.  The self-service dog wash has ramps leading to waist-high tubs where owners spray them, scrub them with brushes provided by the wash, shampoo them and blow dry them.  In addition to the wash, he also sells his own line of dog products such as shampoos and conditioners.  Pet owners now wash their dogs while their car is being washed in the full-service car wash.

Five alternatives for each parameter generate a possible 3,125 different combinations.  If only 10% prove useful, that would yield 312 new ideas.  In theory, if you list the appropriate parameters and variations, then you should have all of the possible combinations for a specified challenge.  In practice, your parameters may be incomplete and/or a critical variable for a parameter may not have been described.  When you feel this may be the case, you should reconsider the parameters you specified and adjust the parameters or the variations accordingly.

We tend to see the elements of our subject as one continuous “whole,” and do not see many of the relationships between the elements, even the obvious ones.  They become almost invisible because of the way we perceive things.  Yet, these relationships are often the links to new ideas.  When you break down a subject into different parts and combine and recombine the parts in various ways, you restructure your perception of the subject.  This perceptual restructuring leads to new insights, ideas, and new lines of speculation.

The Gestalt psychologist Wolfgang Kohler demonstrated perceptual restructuring with animals.  He would present an ape with a problem in which bananas were displayed out of reach and could only be obtained by using techniques new in the ape’s experience.  For example, he would give ape boxes to play with for a few days.  Then Kohler would hang bananas from the ceiling out of the ape’s reach.  When he placed the boxes behind the ape, the ape would try all the familiar ways of reaching the fruit and fail.  When he placed the boxes in front of the ape so that they were visible, the ape would sit and think and suddenly have insight and use the boxes to stand on to reach the bananas.  What happened was that the visibility of the information restructured the ape’s perception.  It suddenly saw the boxes not as playthings but as supports with which to build a structure. It saw the relationship between the boxes and bananas.

In the same way, when you combine and recombine information in different ways, you perceptually restructure the way you see the information.  In addition, the greater the number of combinations you are able to generate, the more likely it is that some combination will serve as an associative link to ideas you could not come up with using your usual way of thinking (i.e., A, B, and D may become associated because each in some way is associated with C).  For example, the three words “surprise,” “line,” and “birthday” in combination serve as an associative link to the word “party.”  I.e., “surprise party,” “party line,” and “birthday party.”

In the car wash example, an associative link was made from the information that was listed to the idea of a bird wash.  The bird wash is a miniature clamp-like device that holds the bird securely in an upright stance so it can be gently washed and hosed (much like a car wash).  It’s designed to help workers cleanse birds who are damaged from tanker oil spills at sea.  It’s expected to save thousands of birds that now expire from the rough handling during clean-up operations.

Creative Thinkering: Putting Your Imagination to Work by Michael Michalko