In an earlier post, we wrote about Thinking in a Social Dynamic Context, mentioning some researchers on conformity anyone who is interested in Thinkibility must know: Solomon Asch, Irving Janis, Stanley Milgram Philip and Zimbardo.

In this post, we will explore the theme of conformity and social dynamics in a more dramatic and impact full way, mentioning the books and movies you must know if you want to defend yourself against manipulation.

Orwell originally wrote a preface complaining about British self-censorship and how the British people were suppressing criticism of the USSR, their World War II ally:

The sinister fact about literary censorship in England is that it is largely voluntary… Things are kept right out of the British press, not because the Government intervenes but because of a general tacit agreement that ‘it wouldn’t do’ to mention that particular fact

In the preface of a 1947 Ukrainian edition of Animal Farm, he explained how escaping the communist purges in Spain taught him “how easily totalitarian propaganda can control the opinion of enlightened people in democratic countries”.

In our blog post  Intelligent Gossip at the Water-cooler, we mentioned Daniel Kahneman, who argues that to become a good thinker we need to acquire a large set of diagnostic labels to identify thinking errors, like those that are available for physicians.

The next expressions can be used to indicate how simply political dogma can be turned into malleable propaganda.: 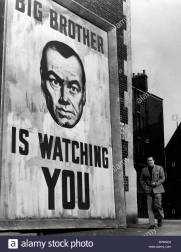 EDMOND O’BRIEN Film ‘1984; NINETEEN EIGHTY-FOUR’ (1956) Directed By MICHAEL ANDERSON 01 September 1956 CTG21439 Allstar/Cinetext/COLUMBIA **WARNING** This photograph can only be reproduced by publications in conjunction with the promotion of the above film. For Editorial Use Only 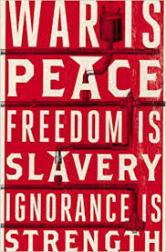 Nineteen Eighty-Four, often published as 1984, is a dystopian novel published in 1949 by English author George Orwell. The novel is set in the year 1984 when most of the world population have become victims of perpetual war, omnipresent government surveillance and public manipulation.

We have here some of it derived from 1984 to get some grip on the social dynamical context on modern life as it is defined by the Internet. 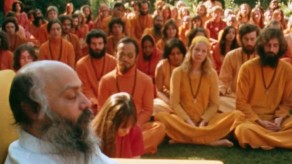 Wild Wild Country is a Netflix documentary series about the controversial Indian guru Bhagwan Shree Rajneesh (Osho), his one-time personal assistant Ma Anand Sheela, and their community of followers in the Rajneeshpuram community located in Wasco County, Oregon. In our opinion, it is worth watching because it reflects perfectly the concepts of Animal Farm and Ninety Eighty-four but now its consequences in reality: The 1984 Rajneeshee bioterror attack and the 1985 Rajneeshee assassination plot.

The Trial (Der Prozess) and The Castle (Der Sloss) 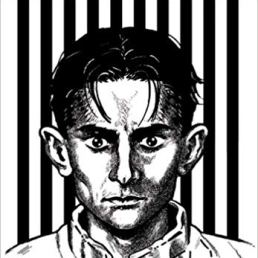 The Trial is a novel written by Franz Kafka between 1914 and 1915 and published posthumously in 1925. It tells the story of Josef K., a man arrested and prosecuted by a remote, inaccessible authority, with the nature of his crime revealed neither to him nor to the reader. In a polical and sociological sense, it demonstrates the mechanisms of an autonomous and inhuman bureaucracy and of a lack of civil rights, in where the protagonist wanders through a labyrinth that seems to be designed to make him fail or even seems to have no relation to him at all.

The Castle is a 1926 novel by Franz Kafka. In it, a protagonist known only as K. arrives in a village and struggles to gain access to the mysterious authorities who govern it from a castle. The Castle is often understood to be about alienation, unresponsive bureaucracy, the frustration of trying to conduct business with non-transparent, seemingly arbitrary controlling systems, and the futile pursuit of an unobtainable goal. 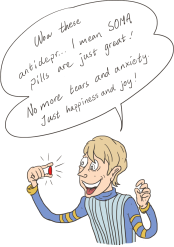 Brave New World is a dystopian novel written in 1931 by English author Aldous Huxley and published in 1932. Largely set in a futuristic World State of genetically modified citizens and an intelligence-based social hierarchy, the novel anticipates huge scientific developments in reproductive technology, sleep-learning, psychological manipulation, and classical conditioning that are combined to make a utopian society that goes challenged only by a single outsider.

Brave New World. If someone ironically refers to a brave new world, they are talking about a new and optimistic situation or system resulting from major societal or technological change but actually is a hypothetical future society in being variously dehumanized and disorienting.

In our post A Repertoire of Concepts we argued that “thinking boxes” or concepts help us to make sense of the world. If we don’t have enough thinking categories available, we can’t make proper sense of what is happening, nor could we imagine other possibilities. In that case, we can’t see what the mind lacks in its repertoire of concepts. For new concepts and Thinkibility vocabulary, we do not have to turn to scientific texts, there are a lot of concepts to find in literature as well.