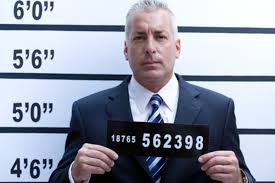 We pledge for a crook’s certificate that all students must obtain before they leave high school.

In most Western countries people are educated to trust other people. Partly, because there are rules and institutions that civilians protect against misuse of trust, and partly because there is an economic necessity for it. Studies show that economic prosperity is correlated with high trust societies. Generally, mistrust is regarded as negative, as illustrated alongside.

At the same time we must note that in a group trust is a norm that as such can easily can be misused to manipulate participants. Don’t you trust me, huh?

Openness to and trust in other people are great character traits, however it might make people naive and vulnerable to people who are not open minded and are not trustworthy.

It is this phenomena of asymmetry that makes that people, hiding under seemingly good intentions, do very bad things, undetected by good but naive people, because they are not able to imagine that people can do such incredible terrifying things. They don’t see it and they don’t believe it. They are blinded by their education to trust people. By their natural inclination or even guilty feelings not to trust someone. They miss the ability of “healthy mistrust”.

We pledge for a crook’s certificate that all students must obtain before they leave high school. Students should follow lessons in mistrust by actually thinking up ways to do bad things in a very clever and hidden way.

Below we give some exam questions as well as suggestions students could earn points for. These questions are not our morbid fantasies or a result of extremely negative thinking; all examples have actually happened, but were undetected by the authorities and the public for years, as educated in blindness they all are.

How to create exorbitant personal wealth with a home for the elderly. Buy a beautiful villa with a pool, sauna, golf court and luxury rooms. Professional photo’s in a glossy flyer. Ask high entrance fee, shorten the stay in the retirement home by cuts in nursing, food and medical care. Remind, your business model is earning money by leveling the frequency of new inhabitants, (5pts).

How to facilitate a pedophilic aberration as someone who takes his social responsibility. Become a well respected boy scout leader (1 pt); Help young people to discover their gender (3 pts); Make a nice folder, set up a foundation and manage a home for orphans in a poor country (5pts).

How to run a profitable nuclear power plant. Privatise it (1 pt). Reduce safety norms and training of personal (2 pt). Shift the costs for necessary maintenance to the government (3 pts).

How to keep negative news out of the press? Deny it (0 pts). Trivialize it (0 pts). Announce something even worse, but not by government’s fault (3 pts). Create such a news, fabricate a major cause for indignation, as lightning rod (5 pts)

How to increase your market share in the cocaine market while being honored as a hero. Give discounts (1 pt). Post at schools in poor neighbourhoods (2 pts). Lower prices so it becomes a consumer product, make it free for young poor people, make them addicted, raise prices for them, unless they want to resell for you (5 pts)

How to exploit massive rape of women as a business model to get more funding. Get more financial support from governments and civilians by showing how serious the situation is. Hire unreliable locals to collect data about raped women and pay for the results. Do some social warfare as marketing. (5 pts)

We would like to even increase the demands on the students. It is not enough to just explore these unethical behaviours; they need to come up with creative solutions to prevent them as well. Students need to pass the problem-solving part of certificates!

Thinkibility – the skills of agile thinking – include the ability of unethical thinking as well.

And coming up with practical solutions.

Those Who have been Raped raise your hand

How Europe’s taxpayers have been swindled of €55 billion.

One Reply to “A Crook’s Certificate – Compulsory for Students?”