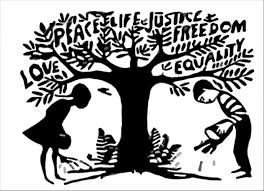 Our sense of justice may be out date, says Yuval Noah Harari. The problem is not with our morality, it is with implementing these values in the modern world – a complex global world. The aim of this series of posts is to sketch possible thinking steps that might help us to get a solution or at least a direction for one of today’s urgent issues.

In our earlier post Sense of Justice we pointed out Harari’s approach to comprehend and judge moral dilemmas. Below we show our efforts to think effectively “to get a solution or at least a direction for one of today’s urgent issues”:

Please note that this is a thinking exercise! And although the topics may be political it should not scare you away or prevent you from using your thinking skills to examine the issues.

The underdevelopment of Africa

For farmer Kobo in Kenia cheap imports of better fed chickens from Europe make the sale of local chickens unprofitable. So, he sold his chicken farm to be able to pay for help of a human smuggler gang. He joined the refugee stream through Africa to the coasts of Europe, risking his life, not knowing where to end with what kind of living. At this way, Europe export chicken wings in exchange for migrants.

Free Trade Agreements should contain an Economic Development Impact Assessment before before parties conclude an agreement, by analogy with Environmental Effect Reports for major infrastructure projects.

This is an issue for factories in small provins in China, where historically children have always been working to support their families.

For Li Na in Longhua in China the work in the factory means that she gains practical work experience. Yet, it also means that she does not get enough sleep and has no time to study.

She is making Amazon’s Alexa-enabled Echo and Echo Dot devices along with Kindles together with more than 1000 pupils, aged from 16 to 18 . She has been required to work for more than two months to supplement staffing levels at the factory during peak production periods. It is against the companies policies and even against Chinese law.

When companies shift their production to lower wage countries. it is apparently too difficult or perhaps economically too tempting to have and remain control over the adherence to legislation.

An agreement should be made by foreign and local companies to ensure that they follow the UN Convention on the Rights of the Child, Universal Declaration of Human Rights and recommendation made by the International Labour Organization (ILO) when setting up a company.

There should be a United Nations Monitoring, Verification and Inspection Commission on Labor with far-reaching powers for unexpected inspections and destruction of illegal products. An example of such a law enforcing body could be the Organisation for the Prohibition of Chemical Weapons (OPCW), an intergovernmental organisation and the implementing body for the Chemical Weapons Convention, which entered into force on 29 April 1997

One Reply to “Social Justice”